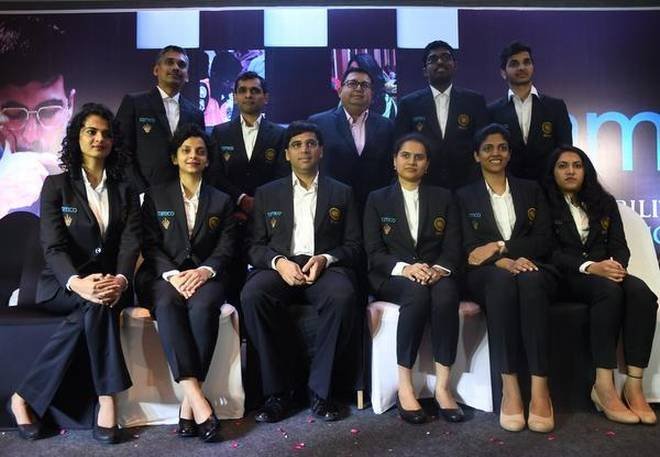 With Viswanathan Anand and K. Humpy back in the National squad, the expectations from the Indian teams in the upcoming Chess Olympiad at Batumi, Georgia, are understandably very high. Fittingly, the men and the women teams have prepared like never before.

Three coaching camps under Grandmaster R.B. Ramesh for men, and Danish-born Scot trainer Jacob Aagaard for women, were well planned and held in five-star comforts. For the first time, the teams are provided with a first-ever support staff of four ‘seconds’ to help in their preparations. In addition, arrangements are in place to provide the players with Indian food for the duration of the 11-round competition. In short, everything the players asked for, the All India Chess Federation has provided.

Now that the teams have reached Batumi, the players are expected to fine tune their preparations ahead of the opening round on September 24. In both sections, India is seeded fifth.

On the eve of the team’s departure here on Thursday, all the team members except P. Hari Krishna (who joined the squad in Istanbul on Friday, enroute to Batumi) were given a warm send-off.

Speaking on the occasion, Anand underplayed the rise in expectations following his return to the team after 2006 and said, “Even without my participation, the team set the bar very high. So that leaves very narrow scope for improvement,” as he referred to the bronze-winning performance in 2014 and fourth-place finish in 2016.

Reflecting on the country’s highest-rated team in an Olympiad, Anand said, “Certainly, we have a very strong team. We are optimistic but Olympiad is a very tough event. There are no real favourites. Every team will have to go out there and fight every day.”

Humpy, returning to competitive chess after 2016 following the birth of her daughter Ahana, said, “I am very excited to play chess after two years. We have a good chance of a medal but it all depends on our form and consistency. It is very important to play decent chess against strong opposition.”

Ramesh spoke about the heightened expectations from the team and said, “It is natural for Indian chess lovers to expect more from this team. At the same time, these players are not the ones to let expectations affect their performances. They are professionals. As the first match nears, they will get into the competition mode and go out to give their best.”