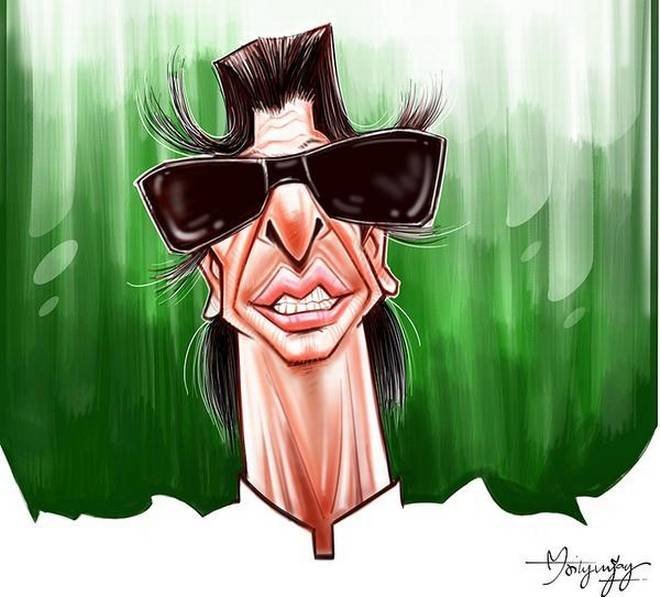 A bleeding foot drawn as a fist, to symbolise the recent 200 kilometre march by farmers demanding a loan waiver, another cartoon where the pen is seen stronger than the gun in the context of the murder of journalist Gauri Lankesh, a caricature of Donald Trump looming large over the globe and Virat Kohli celebrating after a century are some of the highlights of Lines Behind The Smiles.

The ongoing cartoon exhibition features a selection of cartoons and caricatures by Mrityunjay Chiluveru that touches upon diverse themes. The exhibition is on at the Indian Institute of Cartoonists, MG Road, till September 22.

Talking about the exhibition, Mrityunjay says, “When I bagged the Maya Kamath award a couple of months ago, I had shown my works to VG Narendra, the managing trustee of IIC. He was impressed and offered to exhibit my works at the Indian Cartoon Gallery. The gallery works towards promoting and preserving cartooning and cartoonists in India. I cover a range of themes in my caricatures and cartoons. Among my personal favourites are the ones that deal with the farmer protests and a cartoon, of a pencil stopping the trigger of a terrorist’s gun, in the context of the Charlie Hebdo attacks in Paris, a couple of years ago.”

The ability to express any situation with an element of humour is the most important skill for a cartoonist. Mrityunjay adds, “It is not enough to have the skill of drawing. In fact, drawing is secondary. From the caricatures of Albert Hirschfeld to the contemporary works of Jan Op De Beeck, cartoons and caricatures have evolved significantly. I have always been very impressed with Hirschfeld’s caricatures. I feel they were able to capture the personality with minimum lines in black and white.”

Reflecting on his journey into the world of caricatures and cartoons, Mrityunjay says, “I used to draw portraits of political leaders with ash on the kitchen wall when I was growing up. The wall was dark because my mother used a wooden stove. My upgraded Wacom digital drawing board does not give the pleasure of the black kitchen wall. My father was a big inspiration. He was an expert textile artist. My house used to be full of colours, papers, sketch pens, and pencils.”

He points out, “Technology has changed cartooning. Like many others, I have stopped using ink, brush and paper. Cartooning has shifted from paper to digital pads. In fact, we can draw virtually from anywhere. But technology helps only in the technique of cartooning, not the original creativity of the cartoonists.”

Mrityunjay contends that the skill of the cartoonist depends on the ability to find humour in any situation.

“Some cartoonists might have some strong political leanings, but for me, a cartoonist is unbound by any particular image. I had met the American cartoonist Daryl Cagle. He said political cartoons are not as popular as cartoons on celebrities. He said cartoons on Janet Jackson’s jacket will be a bigger hit than a cartoon on Syria. That is the reality of the world we live in.”