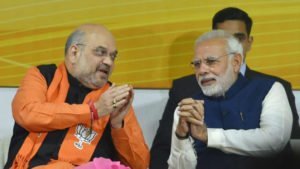 Bharatiya Janata Party (BJP) president Amit Shah on Friday announced that Narendra Modi will become the Prime Minister in the 2019 Lok Sabha elections. Shah said that PM Modi is not a brand but a leader whom the people of the country has accepted with all their heart.

In an exclusive interview to Zee News in the national capital, Shah affirmed that the saffron party will come back to power with a majority. He said that it is the decision of the people that want the Modi government in power.

“We are confident that BJP will win elections. The results of Assembly elections in Rajasthan, Madhya Pradesh and Chhattisgarh will be a combination of work done by Narendra Modi government and respective state governments,” said Shah.

In a jibe to West Bengal Chief Minister Mamata Banerjee and Odisha Chief Minister Naveen Patnaik, Shah said that it is the people who will decide the government and not those in power.

“In 2019, the BJP is definitely going to win more than 23 seats in West Bengal,” reiterated Shah.

Shah also highlighted that BJP’s central government has provided something or other to more than 2 crore households in Madhya Pradesh, Rajasthan and Chhattisgarh.

Speaking on the issue of Ram Mandir, Shah said that if the Supreme Court has decided to hear the case in January, there is no need for an ordinance as of now.

The senior BJP leader said that the prices of fuel and dollar are coming down gradually.

“Congress governments have in the past even removed RBI chiefs, there is no conflict between the Modi government and Reserve Bank of India (RBI),” said Shah.

On the issue of recent political development in Jammu and Kashmir, where the state Assembly was dissolved by Governor Satya Pal Malik soon after PDP chief Mehbooba Mufti declared that she would stake claim to form government with the support of National Conference and Congress, the BJP president alleged that the three parties were trying to mislead people.