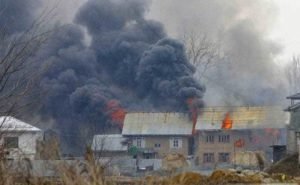 The European Union (EU) has asked Pakistan to take “clear and sustained” actions targeting not only all UN-listed transnational terrorist groups but also individuals claiming responsibility for attacks in the wake of the Pulwama terror strike.

The statement came amid heightened tension between the two nuclear-armed arch-rivals after the February 14 suicide attack by Pakistan-based Jaish-e-Mohammad that killed at least 40 CRPF soldiers in Jammu and Kashmir’s Pulwama district.

Federica Mogherini, High Representative of the EU for Foreign Affairs and Security Policy and Vice-President of the EU Commission, urged Pakistan and India to urgently “de-escalate” the tension which has built up after the attack.

She spoke to Foreign Minister Shah Mahmood Qureshi on Sunday and discussed the current situation, a delegation of the European Union (EU) said in a statement.

The EU is also in contact with India, it said.

Ms Mogherini highlighted the need to “continue addressing terrorism including clear and sustained actions targeting not only all United Nations-listed transnational terrorist groups but also individuals claiming responsibility for such attacks” the statement said.

She said the EU’s policy has always been to promote a dialogue between Pakistan and India to sort out differences.

After the Pulwama attack, which was claimed by the Jaish-e-Mohammad (JeM), India launched a diplomatic offensive against Islamabad.

India has asked Pakistan to take immediate and verifiable action against terrorists and terror groups operating from territories under its control.