19 Lok Sabha Election, winning 39 out of 40 seats in the state. The BJP had contested on 17 seats and won all. Nitish Kumar’s JD(U) had also fielded candidates on 17 seats and lost only one seat. Ram Vilas Paswan’s Lok Janshakti Party contested on six seats and it also emerged victorious on all the seats. 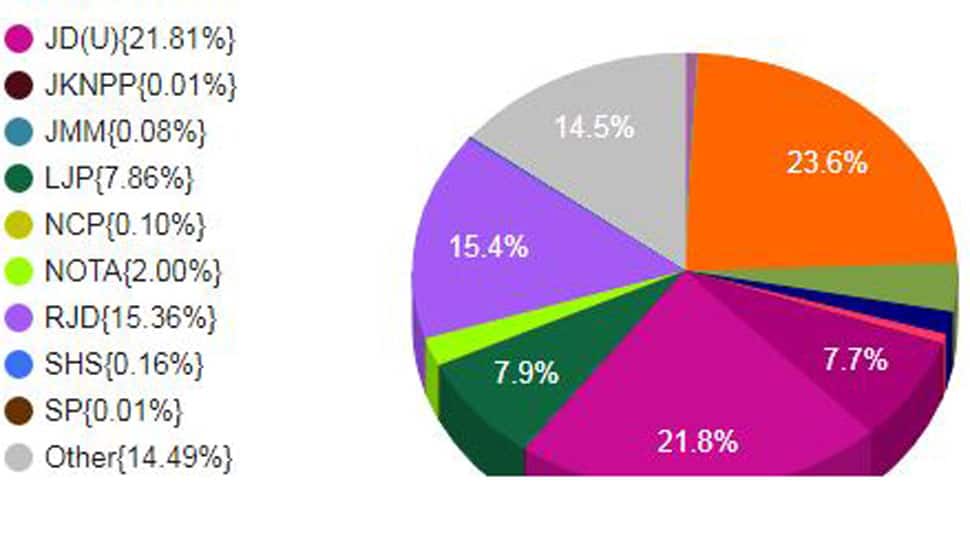 Paswan’s LJP has done extremely well in this election winning all six seats it had contested on. The vote share of LJP is 7.9%, while in 2014 it had got 6.5% mandate. Looking at the increase in LJP’s vote share, it can be said that Prime Minister Narendra Modi’s charisma has helped LJP as well.

The Congress is the only party in Mahagathbandhan, which also includes RJD, Rashtriya Lok Samata Party, Hindustani Awami Morcha and Vikassheel Insaan Party, to open its account in Bihar in Lok Sabha election 2019. Congress won from Kishanganj after defeating JD(U). The vote share of Congress in this election is 7.7%, while it was 8.6% in 2014. The 1% drop in vote share shows that the Congress did not benefit by becoming a part of Mahagathbandhan. RLSP contested from four seats and got just 3.58% votes.

Others, which includes AAP, AIFB, AIMIM, AITC, CPI, CPI(M), JMM, JKNPP and some other parties got 14.5% votes in Bihar.