The lander was spotted some distance away — possibly about half a kilometre — from its intended touchdown point, reports said.

he Indian Space Research Organization (ISRO) has retrieved images and located the lander Vikram on the moon on September 8 and is analyzing them for a clear picture of the lander’s condition, it is learnt.

At 1.45 a.m. on September 7, 12 minutes into its descent onto the lunar surface, the lander lost contact with earth. It is believed to have deviated from its path, fallen silent, and probably crashed on moon.

The pictures are among the early images sent later in the day by the main Chandrayaan 2 spacecraft, which continues to orbit the moon from pole to pole from a 100-km distance. The lander was spotted some distance away — possibly about half a kilometer — from its intended touchdown point, reports said.

The originally chosen region was about 70° south of the lunar equator and about 600 km from the lunar south pole.

On September 8, news reports quoted ISRO chairman K. Sivan as saying the agency was trying to restore contact with the lander.

Neither Dr. Sivan nor authorized ISRO officials responded to phone calls or messages sent confirming the citing of the lander.

Dr. Sivan as saying, “We have found the location of lander Vikram on the lunar surface. The orbiter has clicked its image. We are trying to re-establish contact with it. It would be premature to say anything” else at this stage. 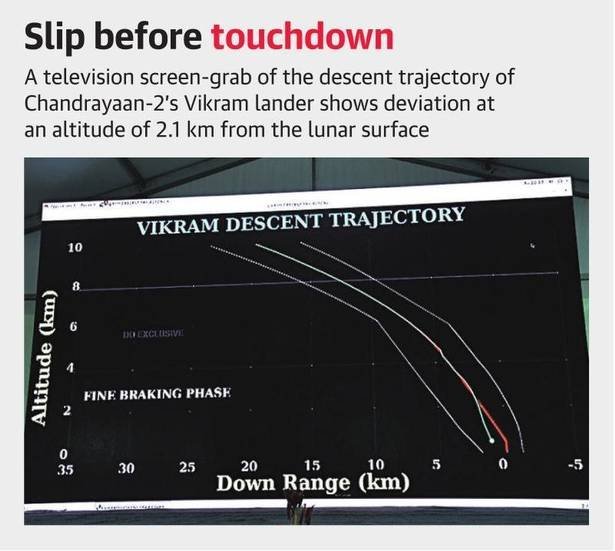 The orbiter is fitted with a fine Orbiter High Resolution Camera of 30-cm resolution. A Terrain Mapping Camera-2 is another imager put among the orbiter’s eight payloads.

Informal but knowledgeable circles who have seen images of the lander on moon said the images were harvested hours after the landing went awry.

Meanwhile, experts said time was running out and the possibility of re-establishing communication with the missing lander looks “less and less probable”.

A senior official associated with the mission said, “Progressively… as time goes by… it’s difficult (to establish link)”. However, with “right orientation” it can still generate power and recharge batteries with solar panels,” he added.  “But it looks less and less probable, progressively,” the official said on condition of anonymity.

Another top ISRO official said the “hard-landing” of Vikram had made the task of reviving links more difficult as it may not have the “right orientation,” and may not have landed on its four legs.