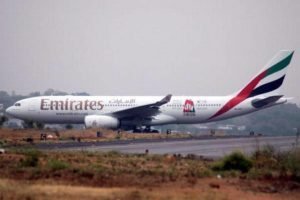 State-owned Emirates and Etihad, two of the Middle East’s top airlines, denied a Bloomberg report on Thursday which quoted unnamed sources as saying Emirates was seeking to take over smaller Etihad to create the world’s largest carrier.

“There is no truth to this rumour,” an Emirates spokesperson told Reuters. Etihad made a similar statement.

The ownership of the two airlines would make any merger politically sensitive. There have been few cross-border mergers within the UAE, a federation of seven semi-autonomous emirates; such tie-ups require the approval of the ruling families of the emirates involved.

Both airlines, which grew rapidly earlier this decade, have faced financial pressures in the past two years because of tough competition in the industry and a regional economic slowdown due to low oil prices.

Earlier this year, the two carriers signed agreements to cooperate in some areas, such as a deal under which Etihad pilots can join Emirates on a temporary basis for two years.

However, Emirates chairman Sheikh Ahmed bin Saeed al-Maktoum ruled out a merger in May this year.

A source close to Etihad told Reuters on Thursday that while a merger could conceivably happen in the future, Abu Dhabi would not quickly give up control of its airline and brand, especially after it had invested billions of dollars in its international airport and other aviation infrastructure.

A senior banker monitoring business in the Gulf said the idea of an Emirates-Etihad merger had been circulating “on and off for at least five years”, but that he hadn’t heard of any new development. No bank has been mandated to arrange a deal, which would be very difficult operationally, he added.

Emirates mainly operates alone — an approach that gives it control over its network and has helped it deliver 30 consecutive years of profit.

In contrast, loss-making Etihad built up a global network of partner airlines in which it invested; that strategy ran into trouble when two of the partners, Alitalia and Air Berlin, became insolvent. Now Etihad is shrinking operations in an effort to become a profitable mid-sized carrier.

Emirates is far larger than Etihad. Its fleet of 268 Airbus A380 and Boeing 777 jets as of March 31 is roughly three times as big as Etihad’s, measured by number of aeroplanes.

Dubai and Abu Dhabi are both spending heavily on airport facilities. Dubai is developing a new airport that will one day be able to handle around 200 million passengers a year and replace Dubai International, currently the world’s busiest airport for international passenger traffic, as Emirates’ hub.

Meanwhile, a new terminal is scheduled to open next year at Abu Dhabi International Airport, where Etihad is based.