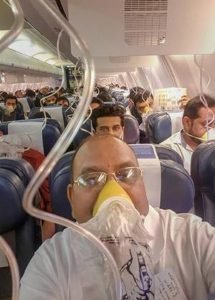 Nearly 30 passengers on board a Jet Airways plane bound for Jaipur suffered nose-bleed and many others complained of headache during takeoff from Mumbai on Thursday after the pilots allegedly forgot to switch on a button that helps maintain cabin air pressure, said safety regulator Directorate General of Civil Aviation (DGCA).

The drop in cabin pressure forced the pilots to return to the Mumbai airport, where five passengers underwent medical examination. There were 166 passengers on board flight 9W697, which took off at 5.55 am.

The Ministry of Civil Aviation has ordered an inquiry into the incident, and the airline has de-rostered the pilots and an aircraft maintenance engineer.

During the climb, the crew allegedly forgot to select the bleed switch, due to which cabin pressure could not be maintained, a senior DGCA official said. “As a result, oxygen masks got deployed. Thirty passengers had nosebleed, a few bled from the ear and some had headache,” the official said.

Turning on the bleed switch results in release of air from the engine used to maintain oxygen inside the aircraft and to provide air conditioning. However, pilots briefly turn off the switch during takeoff to use maximum engine thrust; they then need to turn it on during ascent.

When the pilots “forgot” to turn on the switch, there was a drop in oxygen levels inside the plane, which had climbed to 11,000 feet.

Aviation safety experts said such an incident was “extremely rare” as turning on the bleed switch is part of a check-list pilots are expected to mandatorily adhere to. In the event pilots forget to do so, visual alerts get activated inside the cockpit, depending on which aircraft is being operated.

A Jet Airways spokesperson said that later 144 of the 166 passengers of the original flight travelled to Jaipur via an alternative flight of the airline, while 17 of them put off their travel plans.

Five passengers who were referred to a hospital for additional check-up have since been discharged, he said.

“Jet Airways is extending full cooperation to the DGCA for the ongoing investigation and regrets the inconvenience caused,” the spokesperson said.

Minister for Civil Aviation Suresh Prabhu has directed the DGCA to prepare a safety audit plan for all airlines, aerodromes and flight training schools. He has also sought a report in 30 days.