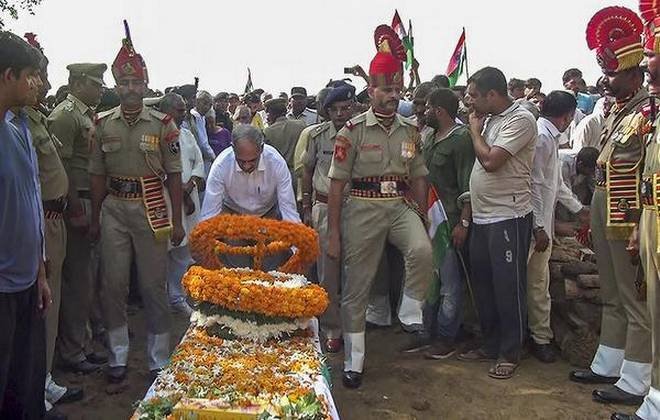 It was a joint search party of the Border Security Force (BSF) and Pakistan Rangers that located the mutilated body of head constable Narender Singh 30-40m inside Pakistani territory, a senior government official told The Hindu. He was found lying in a pool of blood on a raised embankment across the border by the joint party.

On September 18, head constable Singh, who was part of a BSF party that had gone ahead the fence along the International Border in Ramgarh sector in Jammu to clear elephant grass growth, went missing after they came under heavy fire from the Pakistani side.

The BSF submitted a report to the Home Ministry on Thursday, saying that the jawan had received three bullets — on his left eye, left side of his chest and left leg. The report also said that he had several “cut marks” on his body, including on his neck, confirming mutilation.

Such attacks are common along the Line of Control (LoC), but this is the first time that such an incident has taken place along the IB. The 740-km LoC in J&K is under the operational control of the Army and the 192-km IB in Jammu is manned by the BSF.

The official said that on the day of the incident, when after the first burst of fire the other BSF jawans rushed back to their post, they noticed that Singh was missing.

There was no retaliatory fire from the BSF as Singh was still missing and had to be traced. BSF Deputy Inspector General in Jammu called his counterpart — the sector commander of Pakistan Rangers in Sialkot — on the dedicated hotline for several hours but they did not respond. Calls were also made from the Delhi headquarters of the BSF.

“We could not immediately retaliate as our man was still missing. Despite repeated calls to the hotline, they remained incommunicado. Finally the concerned officer came on the line in the evening and we asked them for assurance that a search party will go to look for Singh and there should be no firing from the other side,” said the official.

He said that after initial round of search, the search party came back as it could not locate Singh.

“We then called a flag meeting with the Pakistan Rangers and pressured them to send a joint search party. They agreed and the combing operation began. We found Singh’s helmet and cap. There were blood stains indicating his body had been dragged. Following the traces, we found Singh’s body in a pool of blood, lying on a raised embankment, about 40 metres inside Pakistan,” said the official.

In the flag meeting, Pakistan Rangers denied their involvement in the killing, said the official.

Home Minister Rajnath Singh said on Thursday that he had spoken to BSF DG KK Sharma. “[I] have given instructions to take appropriate action but cannot share the details right now,” Mr. Singh said.