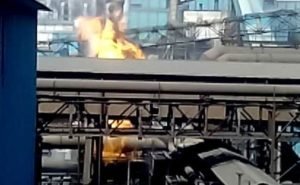 Vishnu Deo Sai, Minister of State for Steel, on Tuesday described the blast in Bhilai Steel Plant as ‘unfortunate’ and informed that an internal committee has been constituted to investigate the incident.

After meeting the victims in the hospital, Mr Sai said that a four-member internal committee has been formed while an external committee will be formed soon to look into the matter.

“The incident is really unfortunate. A normal maintenance work was underway when a sudden fire led to the incident. An internal committee of four members has been constituted. External committee will also be formed soon,” he said.

At least nine people were killed and 14 others sustained injuries after a gas pipeline blast in Bhilai Steel Plant in Chhattisgarh’s Durg district on Tuesday morning.

Following the incident, Durg’s Inspector General GP Singh had informed that 14 people sustained burn injuries in the explosion and were rushed to a nearby hospital for treatment.

Steel Authority of India Limited (SAIL), in a statement, had confirmed that the fire broke out in the gas pipeline in the coke oven complex, with a few workers at the spot sustaining burn injuries. The statement had further said that the fire had been brought under control and all resources have been mobilised to provide adequate care.